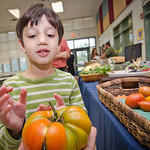 Feel free to thank the legislature and governor for these new or increased sales taxes for 2014:

The following exemptions are repealed (now subject to the general sales tax rate of 4.75%):

* These are the combined state and local rates. Most of the other rates are just for the state and the local tax rate has to be added to it to get the total sales tax rate. For example, in Wake County the local rate is generally 2% so the combined rate is 4.75% state plus 2% county for a total of 6.75%.
photo credit: USDAgov via photopin cc