December the Government ​Accountability Office (GAO) released a report on the 2013 Tax filing season (2012 returns). The title is “IRS Needs to Do More to Address the Growing Imbalance between the Demand for Services and Resources.” The link leads you to a GAO page where you can read the summary or download the report in PDF.

Some of the findings:

The IRS noted in its response that it continues to have budget cuts. With Obamacare enforcement added to IRS’ other growing responsibilities, IRS is having to do more with less. This is a chart of IRS budget versus their requests from 2002-2014: 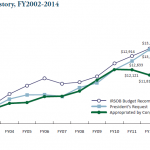 You can also go to the IRS Oversight Board Reports page and download the file from there.